On a private stretch of remote California coast a surf obsessed teenage boy and a hateful old rancher face off. They have only one thing in common — an innocent young cowgirl.

Stoker seems to only care about catching waves and the lobster poachers who are stealing from his traps, but is somehow reluctantly tied to all of the unfolding events.

AVAILABLE NOW ON AMAZON FOR $2.99
Downloadable to your computer, Kindle, and other players!
OR BUY A PRINTED COPY HERE
$12.50 plus $1.60 for shipping.
Email me your shipping address and Paypal account email address.
(Limited printed editions available.)

Any comments about Loaded Barrels? Got your own stories to tell about sneaking into the Ranch or searching for waves on the California central coast? Email them to us and we’ll add them to the collection.

What’s the next best thing to surfing?  Need a fun book to read when the waves aren’t there?  Drop into Loaded Barrels and ride along with a determined gang of guerrilla surfers who will do what it takes to surf the pristine waves of the “ranchlands” of Santa Barbara county.  Among the obstacles:  drug-runners, no trespassing signs, and some no-nonsense cowboys who don’t take kindly to surfers.  Author Dave Natal does a great job of taking us back:  first to a time in central California when you could still surf uncrowded waves if you broke a few rules.  Secondly, he reminds us what it was like in high school, when romance was new and primal and for a few outliers, surfing was everything.  Like any good historical fiction, the book weaves its cast of characters through a mix of real and made-up events.  The fun of course is figuring out which is which, although the author helps with a nice appendix for historical context.  In short, I’d recommend “Loaded Barrels” for any surfer who wants to capture an image of surfing in a certain place and time, but also for non-surfers who may want to get a feel for what the obsession is all about!

“Not until I witness everybody throwing their polyester-cotton blend billboards into a bonfire and going surfing naked will I have been truly understood,” shouts Stoker. He pulls off his shirt and has his pants halfway down before Shaun and Lonnie are able to stop him. It takes Dylan and Ramon to hold him still while Shaun gets him dressed.

“The trap’s empty,” growls Stoker. “This is war, mateys!” He’s looking southwest to the open water through the channel between the two islands. “Those crankersores are out here making another drug run. Ain’t no doubt about it. They don’t know it yet, but there’s a nasty storm a brewin’. They might be dining on my lobsters tonight, but tomorrow they’ll be choking down salt water.”

After surfing another perfect empty Ranch wave a familiar sensation of unreality washes over him, like he’s floating in a bubble above himself, beyond the reality of the tangible world. He splashes water on his face to make sure this isn’t a dream.

When the sound of the second shot explodes in his ears, Lonnie squeezes his eyes closed and finds himself heaving his precious board onto the road.

“I can’t do this without another drink,” he shouts down to the crowd, who cheer him on. One of his mates tosses him his open bottle of Fosters. Lonnie leans out to catch it, at the same time stepping across three feet of open space and onto the board that is hanging from the high ceiling. The crowd goes nuts as he nearly takes a dive off the swinging board. He takes a few swigs, then pours the rest down into the open mouths of his flock of drunken surfers and groupies while he walks to the nose of the board and hangs ten.

Gazing back down the line of a hundred or so posts she’s banged No Trespassing signs onto this morning, Sally’s sick stomach rises through her chest into a heaving sob as she pictures the fence circling all the way back around to where the sweaty butt of her blue-jeans is stuck onto Maya’s worn saddle. She leaves a nasty dirt stain where she wipes her nose on the sleeve of her flannel shirt. The same barbed-wire and No Trespassing signs that keep the world out have her trapped in the cycle of generations of Higgins whose birthright—or curse in her case—it is to live their lives for the grand purpose of preserving this noble land for a bunch of stupid cows.

His head pounds from too many shots of straight whiskey at the Hi Let’s Drink bar last night, and he revels in it. Leroy always feels keener the day after a good drunk. Like a cat opening and closing its claw, briefly he grasps the shotgun that’s hanging on his saddle today.

“Like hell you will, you bunch of lowlife scumbags. You all got one chance to hightail out off my ranch in that little rubber dingy of yours before I let loose old Schuller to carve’n off your nuts and feed’n ’em to the rock crabs.”

He finds his arms mysteriously lost of all their strength. They have turned into stretched and worn out rubber bands dangling uselessly in the water on each side of his board, the glue and stitching on his wetsuit seem to be all that keep his arms, so weighted with fear, from slipping from his shoulders and sinking to safer depths.

“I don’t know. You used to smoke a ton of pot, but you never got hooked on Meth like me, Lonnie. I’m scared I won’t make it without you.”

“Just a quick blow job for old-times-sake?” She puckers at the sight of the bulge in his wetsuit.

As his arms go limp in the water again, his gaze reaches out to the turbulent seething sea, and calm envelopes him. Floating on his back he takes long deep breaths. Even in the midst of the furiously uncensored howling of the ocean he has never experienced such quiet.

Brarark, Brarark, Brarark . . . As he comes up over the rocks a dozen irate voices sound in a chorus of indignant alarm. The worst part about going around the point this early is waking up the seals that sleep out on the sandy stretch of beach below the ravine.

He hears a splash behind him. A boil sucks him a few inches under. And then, he feels the shark’s teeth sinking into his foot.

He turns off the Coast Highway onto the thirteen-mile winding road to the beach. The first sharp curve is almost completely canopied by Live Oaks, evoking a sensation of being sucked through a magic rabbit hole into the tranquil world of pastoral farms and ranches nestled between rolling oak-studded hills.

“I remember kicking guys out when the waves were just pumping and there was no one in the water. They’re not even looking at me. They’re locked onto that surf, mesmerized.”

Club Member Jeff Kruthers told me, “We had a great time drinking and talking about the guys we kicked out. But the first time I met Floyd he was pointing a forty-five at me and the guy in the back of his pickup had a shotgun on me.”

“The attitude of surfers is deteriorating. Aggressive surfers get the waves, but what do they really get out of it? The way guys surf with leashes is bad. Take the leash off them and they won’t go for it right in front of you.”

“It’s like the best girlfriend you ever had, man.” Broken glass grinds under Bradbury’s sandals. “I’m not radical like I was a couple of years ago. But after surfing this place for twenty of the best years of my life, and guys like this photographer Bissell come along and exploit the place, I have to get mad.”

Steve sees the Ranch from a different angle. “I imagine that the greedy part of them fears me as someone who could, through the power of photography, destroy their little system. The things I see are rare and should be preserved for everyone to enjoy.”

“He invited us in for hot coffee and we broke out our graham crackers—he preferred them to donuts. After sitting through his long story about the mountain lion he had recently seen, we were in!”

“You’d see that fin, and there was no mistaking what they were.” Arlen Knight frequently sighted killer whales near Point Conception. “We’d get a little leery when we first saw them coming off the point, but most of us stayed out in the water.”

In 2007 Bixby and Jalama Ranch sold to a Los Angeles based development company for nearly $150,000,000. Except for a small county park, the area remains closed to the public and is patrolled by private ranch guards. 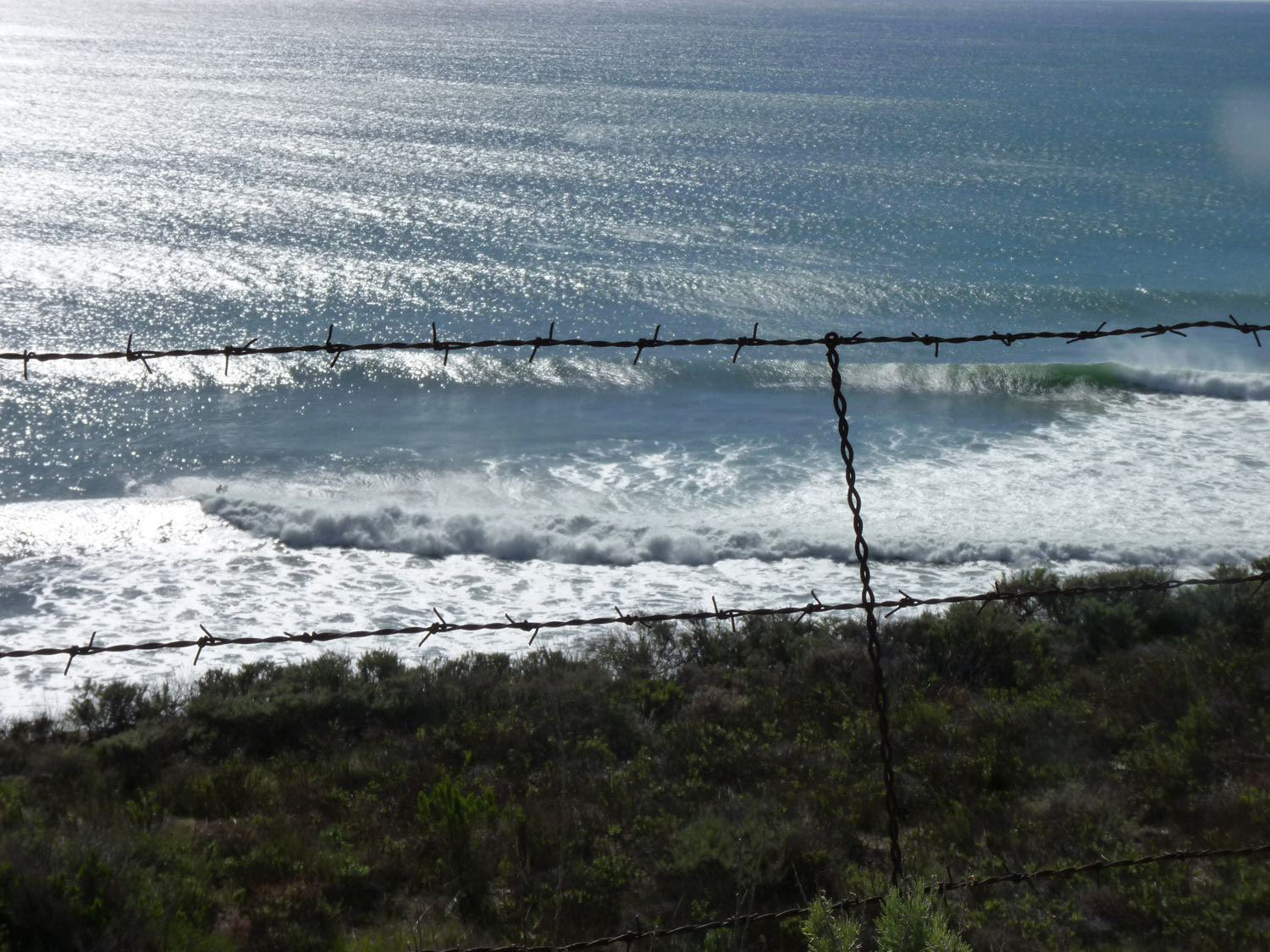 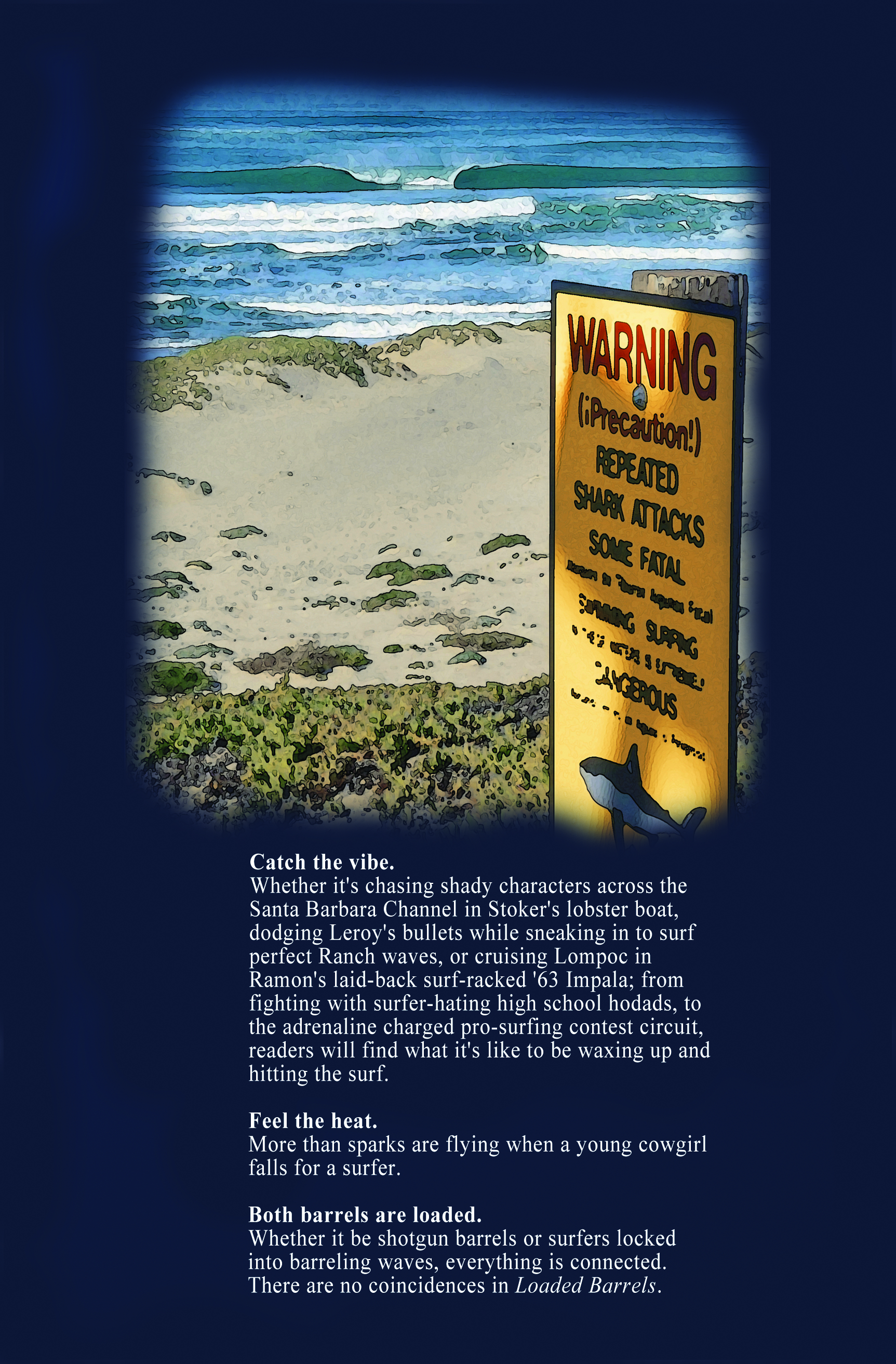 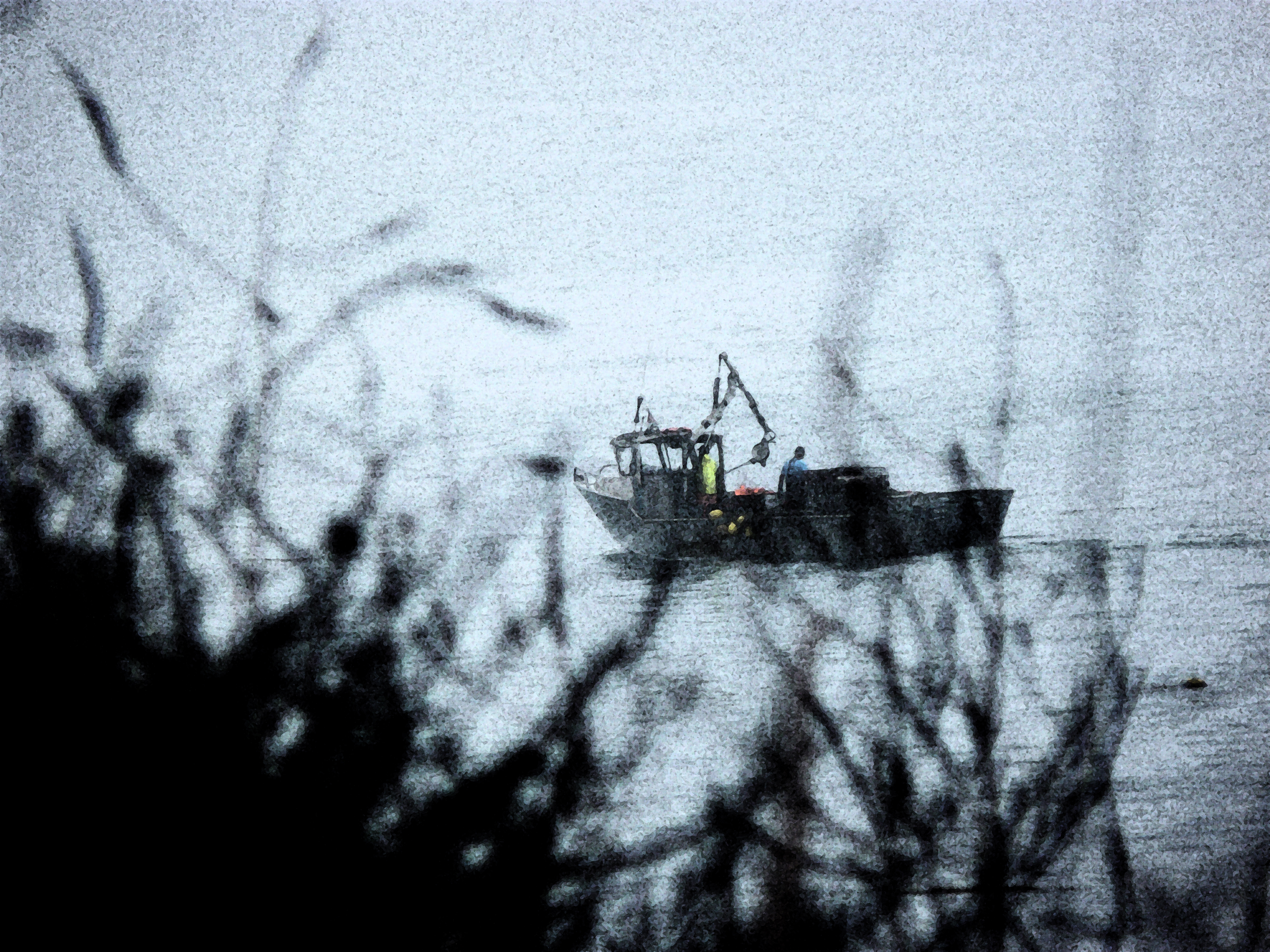 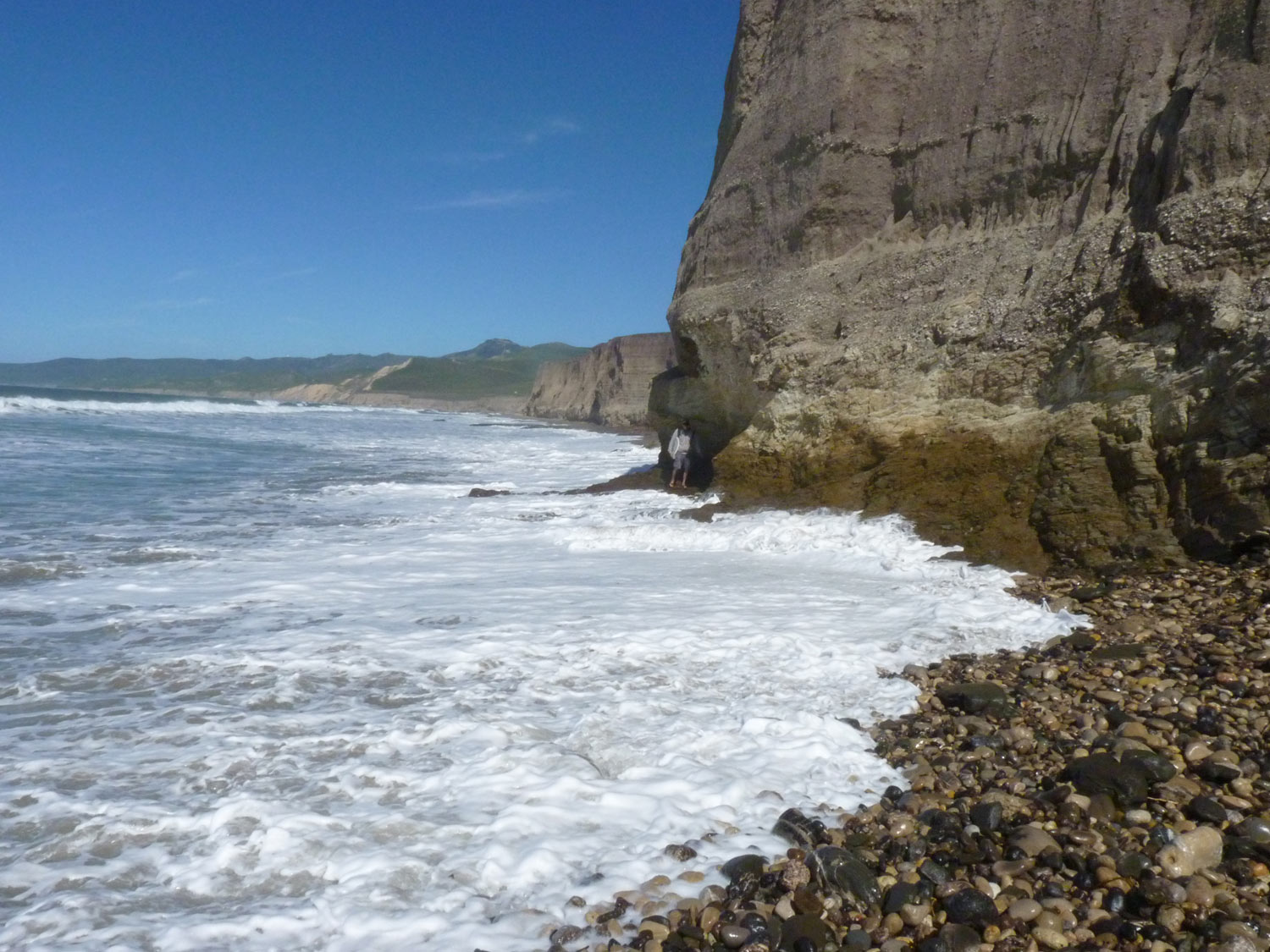 Sneaking In - Trapped Against the Cliff

THE LAST HOLDOUT
Table of Contents

The new northern gate to what used to be Bixby Ranch. 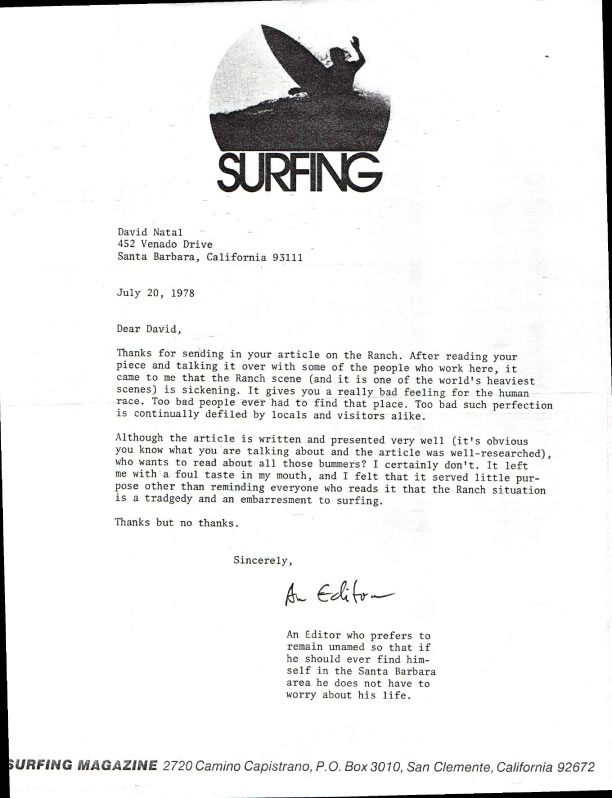 Why was Bixby Ranch manager Floyd accused of beating surfers to a pulp—and what happened to all those classic 50s and 60s boards that he confiscated? Are the stories about this bigger than life character truth or myth?

I met a kid who got caught walking into Bixby Ranch who lost one of his front teeth to the butt of Floyd’s rifle because he mouthed off to him.

Another surfer showed me the patched bullet hole in his board, put there by one of Floyd’s ranch hands.

A San Marcos High School teacher chose paddling a mile around treacherous Point Conception instead of catching a last wave to the beach where Floyd and his cowboys were waiting to nab him.

Floyd buried my friend’s car with a skip-loader.

Sure, protecting the Bixby’s ranch was a huge responsibility, but legend has it that a surfer got Floyd’s only daughter pregnant, then skipped town, and that’s why he held such a furious grudge against surfers.

THE REAL STORY
Loaded Barrels is a fictional story spawned from true stories told to me by Santa Barbara and Lompoc surfers. Were some of these fish-stories that grew more intriguing with time? The Last Holdout, a bonus non-fiction article at the end of the novel, composed of 1970s interviews with the original Hollister Ranch surfers, tells the real story, and it is unbelievable.

If you are a Goleta surfer you will recognize the name of one of my lead characters, Stoker. I met Randy Rodstoker when he was a stoked little Sands Beach surf rat, who my buddies and I nicknamed Stoker. Every character in Loaded Barrels is a conglomeration of local surfers who I grew up with. If you are a local surfer don’t be surprised if you recognize a peculiar characteristic of somebody you know.
The adventures take place between Rincon Point, on the Santa Barbara and Ventura county line, on up to the northern end of Vandenberg air force base, and stretches out to the Channel Islands. Tranquillon Ranch is a fabricated spread of pristine coast that resembles Bixby Ranch fifty years ago. 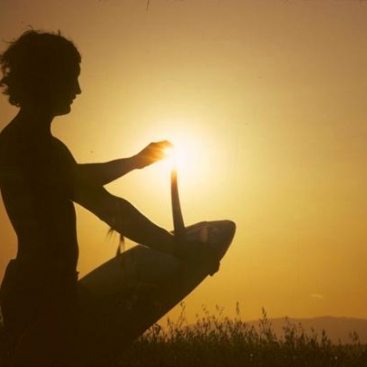 A hard core California surfer since the 1960s, Dave Natal has caught many thousands of waves. This is his first novel.

We're not around right now. But you can send us an email and we'll get back to you, asap.